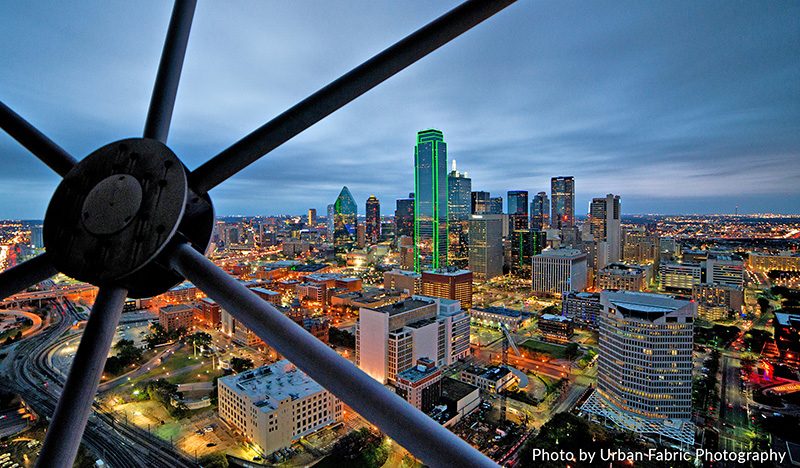 The City of Dallas is the urban core of one of the world’s most dynamic and diverse economies in the world. The city center is the hub of DFW’s talent, technology, culture, and infrastructure, and was recently ranked the top U.S. city for downtown development potential (per research from Yardi Matrix and PropertyShark). With a rich history of success, entrepreneurship, art, and family, Dallas is the perfect reflection of an increasingly interconnected world.

Business. Dallas is home to diverse industry leaders, including AT&T, Texas Instruments, Southwest Airlines, Tenet Healthcare, Jacobs Engineering, and Neiman Marcus. From the tallest downtown high-rise to the modern custom corporate campus, Dallas is the city with a perfect place for any office.

Skills. With access to a labor force of 3.7 million, Dallas is ranked the top metro in the country for talent attraction. Drawing the brightest and best for all business needs, it is also ranked the fourth fastest-growing metro for tech jobs.

Ideas. In Dallas, ideas become industries. The city’s legacy of innovation includes convenience retail (7-Eleven), modern computing (Texas Instruments), information technology (EDS), casual dining (Chili’s), internet streaming video (Broadcast.com), and even the frozen margarita (Mariano’s). Today’s entrepreneurs build on this foundation in a vibrant and supportive start-up community centered in downtown with one of the largest collections of coworking spaces, accelerators, forums, and funders in the southern U.S., all within walking distance.

Networks. Dallas is globally connected, with two large airports, five major interstate highways, and three major freight railroads. 35% of the U.S. population is within a 48-hour truck haul, 98% within 48-hours by rail and all major North American business centers are within a four-hour flight. DFW’s transportation networks converge on Dallas, including major highways and the region’s only comprehensive mass transit system. Dallas Love Field is centrally-located for domestic air travel, within minutes of the City’s major business centers.

Living. With diverse neighborhoods, lifestyles, and culture, Dallas provides a vibrant and high quality of life that only an urban center can provide. The City has over 23,000 acres of park land, 173 miles of trails, nationally ranked schools in nine different districts, eclectic and opulent retail choices, and a vibrant, innovative restaurant scene.

Make Dallas the center of your business plan. For more information on how to partner with the City, visit us at www.dallasecodev.org.