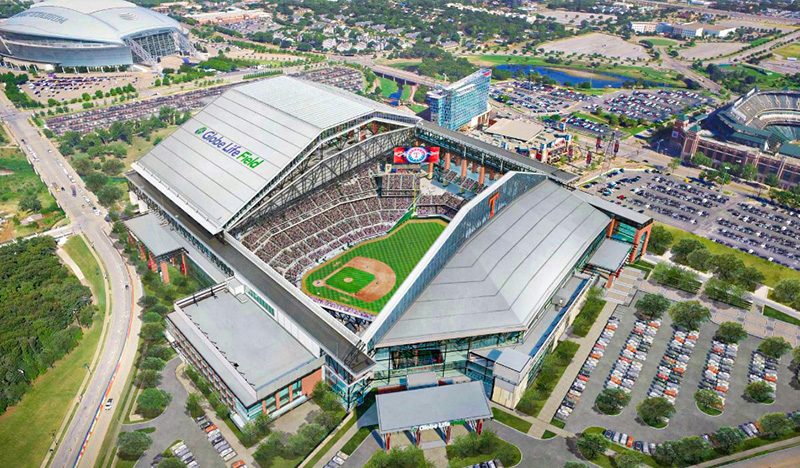 The region’s premier entertainment destination is now leading the region in development projects.

Home to three professional sports teams, two world-class theme parks, and some of the largest concerts in the Metroplex, Arlington attracts over 14 million visitors each year. But it’s more than just tourists who are attracted to Arlington—a long list of high-profile businesses and developments have recently made Arlington their home. In fact, Arlington’s value of economic deals continues to rank amongst the highest in DFW.

Recently, it has been hard to miss Arlington in the headlines. Since General Motors announced a $1.4 billion investment in its Arlington Assembly Plant in mid-2015, the city has hardly gone a month without another big announcement. Such announcements have included the headquarters of Fortune 500 homebuilder, DR Horton; a $1 billion new stadium for the Texas Rangers, Globe Life Field; a $400 million mixed-use entertainment district, Texas Live; a 14-floor luxury hotel, Live by Loews; a 1.6 million-square-foot industrial development, Park 20/360; and several major distribution centers for companies like UPS, Summit Racing, and Rent the Runway. Additionally, Arlington is now home to the largest Esports Stadium in the United States. All in, these deals have amounted to investments of more than $3.2 billion.

Centrally positioned between Dallas and Fort Worth, Arlington is a convenient home base for companies doing business across the Metroplex.

A mere eight miles from Dallas Fort Worth International Airport, Arlington executives can easily travel to either coast in no time at all. Arlington’s position along two major interstates and premier rail lines make the city a no-brainer for supply chain and distribution companies. These qualities are why Arlington was among the first DFW suburbs to develop, and why it was the site of one of the country’s first master-planned business parks, the Great Southwest Industrial District.

While Arlington’s position in the community has always made it a prime location for business, businesses are increasingly being drawn for other reasons, chief among these being the University of Texas at Arlington. UT Arlington is now on its way to becoming the largest university in the University of Texas system. With 45,000 degree seekers in Arlington, companies are attracted by the educated workforce that Arlington has to offer. Now that UT Arlington is a tier-one research institution with nationally ranked science and engineering programs, the business case for Arlington is even more compelling.

With all the recent capital invested, the booming job market, and the exponential growth of UTA, there’s a lot to be excited about in Arlington. Branded as “the American Dream City,” dreams are coming true, and the future is bright in Arlington.