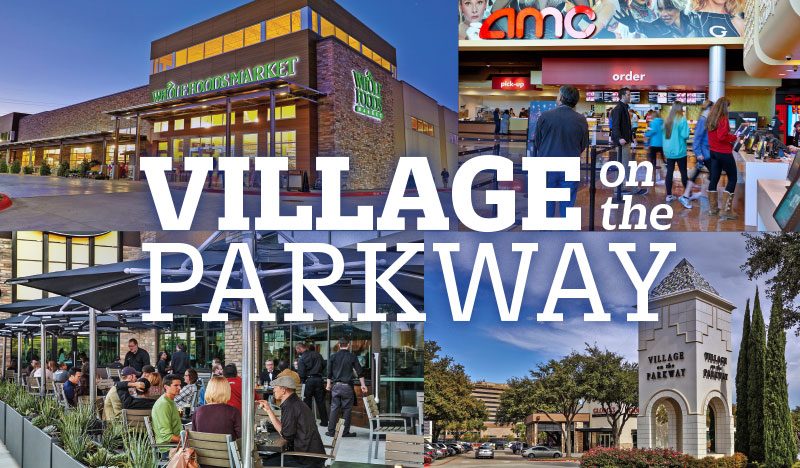 How a trio of Dallas-based partners tackled one of the largest retail adaptive reuse projects in the market.

Dallas-Forth Worth is often hailed for its encouraging business climate and entrepreneurial spirit, but sometimes real estate developments have to go through a few iterations before they can get it just right. Such was the case with Village on the Parkway, a once functionally obsolete shopping center at the Dallas North Tollway and Belt Line Road in Addison. After a nearly $40 million redevelopment, the center has found new life, thanks to a partnership of three Dallas-based partners: Lincoln Property Co., The Retail Connection, and Long Wharf Real Estate Partners (formerly Fidelity Real Estate Group).

One of the first lifestyle centers built in the area, the development got underway in 1979. Back then, it was called Sakowitz Village and housed the 127,441-square-foot Dallas outpost of Sakowitz department stores, which for nearly a decade had been looking to go head-to-head against Neiman Marcus in Dallas. The project was nestled between the Galleria, which was enjoying great success, and Prestonwood Town Center, one of the hottest retail developments in North Dallas. Sakowitz Village reached nearly full occupancy soon after opening in 1981, touting a healthy mix of high-end retailers and restaurants.

A short five years later, though, Houston-based Sakowitz went bankrupt and shuttered its Dallas store. In the midst of an economic downturn and without an anchor tenant, Sakowitz Village also lost its main entrance, due to construction along the Dallas North Tollway. In 1989, MetLife foreclosed on the property. It wasn’t until 1994 that a new tenant leased the former Sakowitz space: national housewares retailer Bed Bath & Beyond, which operated there for more than 15 years. A rezoning effort in the mid-1990s opened Village on the Parkway for future hotel and office development, and Southwest Properties purchased the 375,000-square-foot complex from MetLife in 1995.

Village on the Parkway changed hands again in 2004, when it was acquired by The Retail Connection and Colonial Properties Trust. That group held the development until 2007, when it sold to DRA Realty Advisors. September 2010 brought another shift; special servicer JER foreclosed on DRA’s interest in the property after Bed Bath & Beyond vacated its space there. Village on the Parkway hit the market as one of the most sought-after commercial properties in DFW, thanks to its positioning and location. Out of a huge pile of contracts vying for the deal, the winning bid came from the partnership formed by Lincoln, The Retail Connection, and Long Wharf in April 2011.

At that time, Village on the Parkway was at 43 percent occupancy and declining daily. But readied with new capital, strong tenant relationships, and a team with years of experience, the combined forces set to work on a plan that would successfully redevelop Village on the Parkway into the retail and restaurant mecca it is today.

“I was walking back to my office one day and Steve Lieberman was sitting outside at Perry’s restaurant, and he asked if I was bidding on Village on the Parkway,” says Robert Dozier, executive vice president of Lincoln’s retail division. “He said we ought to partner, and that was the start of us collaborating. The real estate was at ground zero, but it was functionally obsolete in the way it was laid out.”

Among other challenges, Village on the Parkway’s layout had to be completely reimagined and overhauled to maximize the potential of the redevelopment. The bold strategy included demolishing nearly 150,000 square feet of space—almost half of the total square footage. The partners then rebuilt 128,000 square feet to meet the specifications of tenants 24 Hour Fitness, AMC, and Whole Foods, bringing Village on the Parkway to 11 buildings totaling 351,385 square feet.

“We broke the property up into three phases,” says Lieberman, co-founder and CEO of The Retail Connection. “We had a north phase, which was the grocery anchor phase; we had a south phase, which was the entertainment phase; and then the assets in the middle were to be the lifestyle aspect of the property. Whole Foods became the anchor to the north phase of the property; AMC became the anchor to the south, and then we populated the axis with great restaurants and retailers to connect that daily vibrancy throughout.

The partnership got much-needed help from the Town of Addison in obtaining zoning and plan approvals, and won a $21 million incentive package in early 2012. Orlando Campos, director of economic development and tourism for the Town of Addison, says the revitalization of Village on the Parkway has already had a positive impact.

“There have been several attempts by previous owners to revitalize Village on the Parkway, but they were never successful,” Campos says. “Then The Retail Connection and Lincoln Property Co. came in and purchased it, and the town sort of started giving some feedback in terms of things we would like to see for the center. Now, you go there on any given weekend, and it’s basically the happening place.”

Once the formal agreement between the Town of Addison and the partnership was finalized, developers quickly put together differing layouts and plans to see which concepts worked best. They also turned the project over to the University of Texas’ real estate program, which enlists MBA students to evaluate different development projects and share thoughts on how to maximize their potential.

“We had come up with our solution with architects and the team, then we also put it out there in a competition, which was fun and exciting,” Dozier says. “Their ideas kind of confirmed what our thoughts were. We used some of their thoughts as well.”

The vision for the redevelopment aimed to leverage its strengths: location, high traffic, large daytime and nighttime populations, high-income visitors, and a large trade area. New plans repositioned anchor tenants to face south into the center, which opened up the flow of the property.

By May 2015, with their work complete, the partners sold the property to an institutional investor, UBS Financial Services Inc. The company had owned The Galleria since 2002 and was looking for a lifestyle component to add to its Dallas-Fort Worth portfolio. As it turns out, Village on the Parkway was a perfect match.

“It sold for quite a bit more than Highland Park Village, which is considered the gold standard,” says Steve Lieberman, co-founder and CEO of The Retail Connection. “To have Village on the Parkway be in that same league is a tremendous accomplishment.”

Far from having maximized its full potential, Village on the Parkway still presents some promising opportunities for further development, namely at its southeast corner adjacent to the AMC theater. Dozier says the partnership looked at building multifamily or condos there, but ultimately left that decision to its new owner, UBS.

“We had a great piece of real estate, a very challenged asset sitting on that real estate, and we put together a great team where everybody played their position very well,” says Alan Shor, co-founder and president of The Retail Connection. “The strategy was almost flawlessly executed, and the end result was one of the best we’ve seen in this market.”

VILLAGE ON THE PARKWAY: A HISTORY