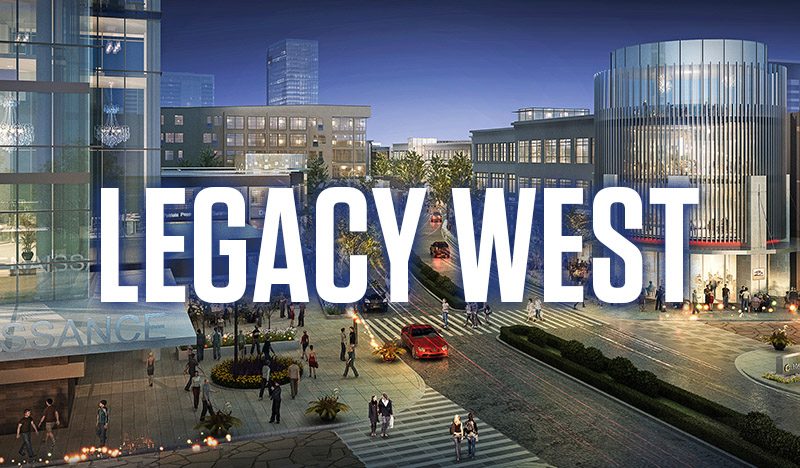 For 16 years, developer Fehmi Karahan eyed 240 acres of land owned by J.C. Penney at the southwest corner of the Dallas North Tollway and State Highway 121. He saw the potential of the property surrounding the retailer’s corporate headquarters even before he was selected by EDS to develop The Shops at Legacy in Legacy Town Center on the east side of Legacy and the tollway. J.C. Penney had acquired 360 acres in 1987, but only used 110 acres for its headquarters campus, after relocating from New York to Plano. Despite Karahan’s interest, the company “wasn’t interested and they weren’t in a rush to do anything,” he says.

About three years ago, though, financial struggles caused J.C. Penney to begin looking at additional revenue sources. The retailer invited five companies to vie for the right to develop the land by submitting a request for proposal. When Karahan learned he would be competing against big boys like Trammell Crow Co., he called for reinforcements, ultimately forming “Team Legacy” with corporate office developer KDC and multifamily developer Columbus Realty Partners. The strategy worked, and Team Legacy was awarded the plum project in February of 2014.

When they heard the good news, the partners enjoyed a nice lunch with champagne, then got back to work, says Steve Van Amburgh, chief executive of KDC.

“We made a conscious decision to put the three of us together,” he says. “Our three firms have done over $1 billion in development at Legacy, and that was before we formed our land venture with J.C. Penney. Fehmi Karahan and Robert Shaw [of Columbus Realty] are true visionaries. They have created a mixed-used development that’s second to none, and we’re just fortunate to be teamed up with them.”

KDC is certainly no slouch. The developer has completed 11 projects at Legacy, totaling more than 3 million square feet. Projects it has underway at Legacy West will significantly increase those figures. Last July, KDC won a 1.1 million-square-foot headquarters for Toyota Motor North America. The $350 million campus is being built on 100 acres at the southwest corner of S.H. 121 and Legacy Drive. Once completed, it’s expected to house more than 4,000 employees.

KDC also is developing a 265,000-square-foot headquarters for FedEx Office. The global company is combining two North Texas offices into one campus at Legacy West, where it will employ about 1,200. The project broke ground last July and should be ready in October, says Mike Rosamond, executive vice president at KDC.

Transforming 240 acres of farmland into a successful $2 billion mixed-used development requires a strategic master plan that considers how things will evolve in the coming decades, Karahan says. “Today multifamily is hot, but real estate changes,” he says. “We want to create a plan that is flexible enough during the changing economy that can create maximum value.”

The velocity of office development has helped jump-start the other components of Legacy West. They include 280,000 square feet of retail and restaurant space, 260,000 square feet of multitenant office space, more than 600 luxury apartments, 100 single-family homes, and a 300-room Renaissance Hotel.

Karahan also is working with the city of Plano and the North Texas Tollway Authority to connect the east and west sides of Legacy by making the Legacy bridge over the tollway more pedestrian-friendly. He predicts that in 10 to 20 years the area will simply be known as Legacy, much like the Midtown or Lower East Side districts in New York City.

The success of Legacy Town Center, and the backing of Invesco Real Estate, which now owns 1,700 apartments in the town center and is a partner in Legacy West, will help propel the new development, Karahan says.

“Everything that we learned in the last 15 years … we can implement that,” he says. “The goal is to make Legacy West more beautiful and more exciting and much larger. Two years from now, it’s going to be unbelievable.”

J.C. Penney acquired 360 acres of land within Legacy in 1987, but used only 110 for its headquarters campus, leaving 240 prime acres available. Teaming up to win the right to develop the land were these three Dallas companies:

The Karahan Cos.: Led by Fehmi Karahan, developer of The Shops at Legacy in Legacy Town Center—the first project in the country to create a suburban-urban district within an existing office park. Karahan has since extended his impact with a number of other projects throughout North Texas.

Columbus Realty Group: After suffering a knee injury and retiring from the National Football League, Robert Shaw turned to real estate and formed Columbus Realty Group. He was among the first to develop walkable urban neighborhoods, pushing forth a fundamental optimism about cities, their urban cores, and long-term viability.

KDC: Known as a developer of choice for corporate campuses, the company’s client list reads like a “who’s who” in business. Along with its work at Legacy West, KDC is working on a 2 million-square-foot campus for State Farm and a 500,000-square-foot campus for Raytheon, both at CityLine in Richardson. The company is led by Steve Van Amburgh.