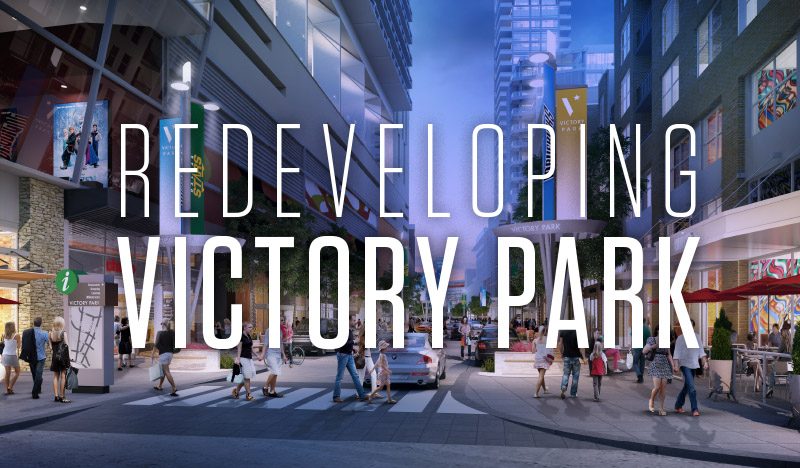 They hoped it would become Dallas’ Times Square. When it didn’t, a new plan was created to change the game around the American Airlines Center.

Victory Park, the 75-acre development north of downtown Dallas anchored by the American Airlines Center, has proven to be one of Dallas-Fort Worth’s trickiest parcels of real estate. Initially developed by Ross Perot Jr., whose monolithic contributions to DFW real estate include his Hillwood Development Co.’s AllianceTexas and the creation of the world’s first purely industrial airport, the vision for Victory Park was to be Dallas’ own version of Times Square.

And between 2006 and 2008, it looked like Perot would realize that dream. Over those two years, 400 condominiums, 380 apartments, 250 hotel rooms, 500,000 square feet of office space, and more than 200,000 square feet of retail were constructed at Victory, which sits at the intersection of the Dallas North Tollway, Interstate 35, and Woodall Rodgers Freeway and is flanked by the Design District and the Arts District. Condominiums were listed for, at the time, twice the going rate for comparable residential space in Turtle Creek. In just three years, the area became home to the W Hotel, Victory Plaza, One Victory Park, and myriad residential properties—all revolving around the 840,000-square-foot American Airlines Center.

By the end of 2008, Victory Park had grown the city’s tax base by more than $500,000, and it had paid $40 million to the TIF district that had funded several of its initiatives. It looked like Perot and Hillwood had changed the game, successfully tackling the feat of developing a huge mixed-use project in a historically underdeveloped area that was anchored by a sports facility, while also bringing high-rise living to the area. But then, the housing bubble burst, a nationwide recession ensued, and everything changed.

PICKING UP THE PIECES

Hillwood took a huge hit during the Great Recession, when it lost $275 million in equity and forfeited ownership of the buildings in Victory Park to its investment partners. Two months later, the Mandarin Oriental Hotel planned for the west side of Victory Park’s main residential drag, Victory Park Lane, announced that it, too, was walking away from Victory. (The 40-story project would have been one of the tallest buildings in the city, with 120 rooms, 90 residential condominiums, 75,000 square feet of luxury retail, and 275,000 square feet of office space.) Instead, its half-finished parking structure would sit in awkward disconnect with the one-sided retail component on the east side of Victory Park Lane until a host of new players pulled together an ambitious redevelopment venture that’s currently underway.

After becoming a partner in the development in 2005, UST XVI Victory Park, an entity managed by Orlando-based REIT Estein & Associates, became majority owner of Victory Park in 2009, after Hillwood forfeited its ownership share. (Hillwood still owns most of the land in Victory.) In 2011, Cousins Properties (now Cushman & Wakefield) was awarded Victory Management responsibilities for UST. In 2012, UST XVI Victory Park partnered with Fort Worth-based Trademark Property Co. to hold an intense design charrette and determine a redevelopment plan.

“We embarked and did a bunch of community engagement sessions and focus groups and worked with the city and did an analysis—a big analysis that involved multiple architects, engineers, placemakers, city folks, developers, leasing folks, et cetera,” says Terry Montesi, CEO of Trademark. “We ended up deciding and recommending that it could be fixed, and it could work. There were so many criticisms when we did our research that Victory is confusing; it’s not easy to use, which, if something’s confusing and not easy to use, then people will just stop coming.”

But the players believed Victory could realize its potential. So they set to work, with Trademark coming on as a partner to reposition the retail. The partnership worked with the city on initiatives like taking out the median on Victory Park Lane and trimming its lanes to widen the sidewalks by three feet on each side. The city also helped add a crosswalk and a stoplight at Olive Street across from the W, while also adding a median to Olive Street to shorten the walk between Victory Plaza and the hotel. The once one-way Houston Street and Victory Avenue are being converted to two-way streets, and a dedicated bike lane is being added on Houston that will extend the Katy Trail beyond its awkward termination at the Lexus Garage. Decorative benches, pots, and landscaping have been added to create a rich, urban streetscape. The partnership, too, is spending more than $500,000 just on signage to direct patrons to parking and roadways based on whether they’re visiting a restaurant, an office, or going shopping. The overall goal, Montesi says, is user-friendliness.

“We really don’t have a three-block-long, two-sided, walkable street retail district,” he says. “So to have a compact, three-block, walkable district with a terminus on both ends—the AAC and the House, and then Perot Museum and House of Blues—it’s going to bring to Dallas street retail that it sorely needs.”

The now two-way Victory Park Lane is the primary retail street, and the partnership’s vision for it entails polishing up that unfinished garage that was originally built for the Mandarin Oriental Hotel that never came to fruition. New retail and an updated garage are scheduled to be completed in the second quarter of 2016. At the northwest corner of High Market Street and Victory Park Lane will soon be a multilevel mixed-use building, which will include a 700-seat Cinepolis movie theater, the first of the high-end Mexican brand’s location in Texas.

“I don’t think there’s going to be another Cinepolis in Dallas soon,” says Lance Fair, Estein & Associates chief operating officer who is also the vice president of the UST XVI Victory Park partnership. “As I talk to markets in which they are currently operating—Florida, California—those landlords say their delivery is top of the market. … No dis against other theater operators, but I like the idea that we’re going to have a unique theater in Victory.”

“Our criteria going forward is that every single storefront, every tenant has to look completely different than the tenant next to it, which is how real urban streetscapes look,” Montesi says, referring to what he calls “phase one-half” of the partnership’s redevelopment vision on the retail side. “They don’t look like the heavy hand of an office developer controlled the ground plan or the ground floor. I think if you go out there, and you look at the east side of [Victory Park Lane], you’ll already see that we’ve added four, five, six tenants, and that their storefronts are all different, their signs are all different.”

Dickenson and Cowen are also handling leasing on behalf of Victory Center, which is being built just north of One Victory Park by Hines and Atlanta-based Cousins Properties. Announced last November, the 23-story, 466,000 square-foot project will include office and retail space, plus a rooftop terrace space and a planned fitness center.

“We have no [available] office space for rent, and as the market knows, there’s a billion being marketed to be built in office,” says Estein & Associate’s Fair. He also notes that the district’s hotel and entertainment offerings cater to a corporate crowd, with the former 33rd floor Ghost Bar space at the W—now called Altitude—repositioned to accommodate corporate functions after a $3.5 million renovation at the hotel a few years ago. Its meeting space is currently being renovated, which Fair believes will even further bolster Victory’s status as one of the best office markets in town. “We’re continuing to reinvest in the hotel, and it’s continuing to deliver fantastic financial results,” he says.

If the goal of the Victory Park redevelopment is user-friendliness, the partnership has all facets of the live-work-play balance covered. The district is home to more than 1,700 residential units, and plenty more are on the way.

The 377 studio, one-, and two-bedroom Arpeggio Apartments sit at the corner of Victory Avenue and Olive Street and opened in 2014. The community was developed by Behringer Harvard in partnership with Mill Creek Residential Trust and consists of two five-story buildings around a central parking garage. Camden Property Trust’s Camden Victory Park sits on 4.7 acres at the northeast corner of the American Airlines Center at All Star Way and Houston Street, and its 425 apartment units will come online in late 2015. The 28-story Cirque high-rise, in addition to offering panoramic views of the city, offers more than 250 one-and two-bedroom apartments. It was opened in 2007. Novare Group’s SkyHouse, which opened in January 2015, offers 336 studio, one-, two-, and three-bedroom apartments at the corner of North Houston Street and Continental Avenue. And Alamo Manhattan’s Moda Dallas apartments opened at Payne Street and Harry Hines Boulevard in spring 2014, too. The iconic House at Houston and Broom streets boasts 28 stories of condos for sale, while the House of Blues-adjacent Terrace at Houston and High Market streets offers a midrise version of similarly designed condominiums.

The Vista apartments at Houston Street and Museum Way, the first luxury apartment rental community in Victory Park, offer six-story, 129-unit complex digs that were developed in 2006. (It was sold by the partnership to institutional investors in 2012 when it was 98 percent leased.) And all of this construction has boosted leasing rates, which are catching up to Dallas’ other “hot” neighborhoods, with Estein & Associate’s Fair noting that rental rates for multifamily in Victory Park are competitive with communities in neighboring Uptown.

Development partners hope to create a place that residents, tenants, and visitors will want to visit. Trademark’s Montesi notes that public art will be a priority, with Victory’s communal spaces eventually becoming an expansion of the Art and Design districts of Dallas through a robust public art program. He says the Victory Park partnership is working with public art consultants and spatial artists in order to be a better steward of Dallas’ artistic soul. And all of this, according to both him and Fair, will reboot Victory Park with its own unique personality.

“A destination that we’re proud of, versus a failed effort that we weren’t proud of—that’s really what we want to accomplish,” Fair says. “We could’ve sold almost everything we had and left the retail as a disaster, and walked out of here. But we are committed to staying the course, and making this something that Dallas would be proud of. I think it’s going to be a new destination.”