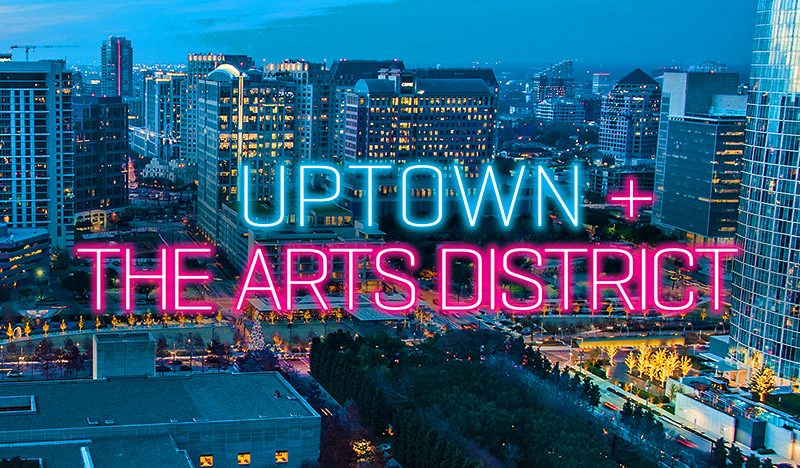 Now one of the most successful commercial submarkets in the country, it’s hard to believe that just 30 years ago Uptown Dallas was predominately comprised of single-family residential properties. Back then, all of the action was downtown, where Trammell Crow and others were putting up skyscrapers during the 1980s building boom.

A stark contrast to the shiny buildings that stand tall in Uptown today, the area originated in the late 1800s as a neighborhood inhabited by Eastern European Jewish immigrants. By the early 1930s, and as a result of displacement by the Mexican Revolution and job opportunities created by industrialization in Dallas, Mexican immigrants moved in alongside them. The flourishing area changed and evolved from Little Jerusalem into Little Mexico, and gave birth to such Dallas institutions as El Fenix and Luna Tortilla Factory. Later, through eminent domain, the neighborhood saw a flurry of commercial redevelopment.

From the 1950s to the 1980s, the City of Dallas began changing and chopping roads in order to create better fluidity for commuters traveling into and out of the city’s core. By the ’60s, the Dallas North Tollway had created a physical divide through Little Mexico. By the ’70s, Cedar Springs and Pearl Street had been significantly widened, while Harry Hines Boulevard; McKinnon, Carlisle, and Cole streets; and Lemmon and McKinney avenues all became one-way. A connection at Maple-Routh was chiseled across existing street lines, and disintegration of the grid in what had been Little Mexico led to disinvestment.

Uptown’s evolution into a commercial standout began in 1983 with development of The Crescent. Even in a city known for “wow” developments, this $400 million project stood out. Built on 10 acres, the 1.1 million-square-foot office, hotel, and retail complex opened to great fanfare in 1986. Its neo-French classical design was unlike anything the market had ever seen.
“The neighborhood in 1983 when The Crescent started construction really was just bland, on the edge of downtown,” says John Zogg, managing director of Crescent Real Estate Holdings. “The Crescent was an extremely ambitious project for the time, and it really jump-started a new neighborhood.”
Uptown Takes Shape

Robert Shaw pioneered multifamily development in Uptown when he broke ground on the Meridian Apartments in 1990. He would go on to build 14 projects in the neighborhood. (He and business partner Roger Staubach hope to have a similarly transformative impact on Trinity Groves, where they’re building a 1,000-unit apartment complex.)

In the early 1990s, Uptown Dallas incorporated to accommodate the Uptown Public Improvement District, with the overall goal of revitalizing the area. A small but mighty group of residents and investors drove initiatives to create momentum and fuel investment, which yielded residential development, the M-Line Trolley, and redevelopment of the Katy Trail.
“The development of the Katy Trail was a milestone, adding the appeal of recreational opportunities to the re-emerging neighborhood,” says Amy Gibson Tharp, president and executive director of Uptown Dallas Inc. “UDI has been a supporter of the Katy Trail since its inception, contributing to capital projects and security, and encouraging community involvement through events.”

Countless Dallas developers have kicked up dirt in Uptown over the past 30 years to create the region’s hottest submarket. Rents and property values have soared with gap-bridging architectural feats like Klyde Warren Park, completed in 2012, creating public green space that’s now flanked by restaurants, residences, and entertainment venues.
According to UDI’s Gibson Tharp, conservative estimates show Uptown has 15,000 residents within its 570 acres—more than double the number of people who lived in the district in 2000.
On the commercial side, Uptown boasts some of the highest occupancy rates and rents in the country. About $1.2 billion in construction projects have recently been completed or are about to break ground. Since the creation of the PID, Uptown’s portfolio value has grown from $500 million to $3.8 billion.

One of Uptown’s big players, Gabriel Barbier-Mueller’s Harwood International, helped pioneer the district. To date, Harwood has developed 22 million square feet of space in Uptown. He has several projects underway and even more planned for the future. The Swiss-born real estate developer likes to incorporate his worldly passion for art collecting and the Bushido Code of the Samurai into his projects; he’s bringing an international spirit to Uptown that will, in turn, bring greater recognition to Dallas on a global scale.
“We have 18 city blocks that we call Harwood, which stretch from the Natural Museum of History to the Katy Trail,” he explains.

For each of these projects, Babier-Mueller has tapped a number of noted advisers, including Jean-Michel Wilmotte, an architect whose projects include Paris’ Musée d’Orsay and Mandarin Oriental Paris Hotel.

No one was sure what to expect when Klyde Warren Park opened in 2012. The hope was that it would connect Uptown with The Arts District and downtown Dallas, and it has certainly done just that. But the biggest winner may, in fact, be Uptown, where office rents—especially for projects on or near the park—have soared. Uptown has also benefited from completion of the Dallas Arts District in 2012. The largest contiguous urban arts district in the nation, it spans 68 acres and 19 contiguous blocks. Lucy Billingsley was the first to bring office space to the district with One Arts Plaza, which opened in 2007. Craig Hall has followed with KMPG Plaza at Hall Arts, slated to open in 2015.

These one-of-a-kind amenities just strengthen the allure of the Uptown/Arts District submarket, where only a few pockets of land remain available for development.

“It has the highest expression of every product type, and it’s such a draw as far as people coming in,” says Zogg with Crescent Real Estate. “It’s so hard to go find land and just make something happen like this in urban cities; [Uptown] was created in the last 20 years to be the best part of Dallas, by far. There’s only a limited amount of land, so there’s only so much more we can do with it, and there’s a lot of people trying to get in.”

Beyond commercial developers, Uptown is attracting a swarm of residential builders, too. As the neighborhood matures, it’s attracting a wider variety of inhabitants, says Gibson Tharp of UDI.

“The Uptown community is becoming more diverse, as millennials desire to stay longer and start their families here, creating new demands on educational and recreational opportunities,” she says. “Empty-nesters and baby boomers are seeing the benefits of ditching the yard work for a walkable neighborhood and comprise nearly 20 percent of our growing demographic. Uptown is pushing through the threshold where it can sustain a variety of retail sectors beyond nightlife. … I feel lucky to be leading this organization as we focus our priorities on improving mobility through urban design.”