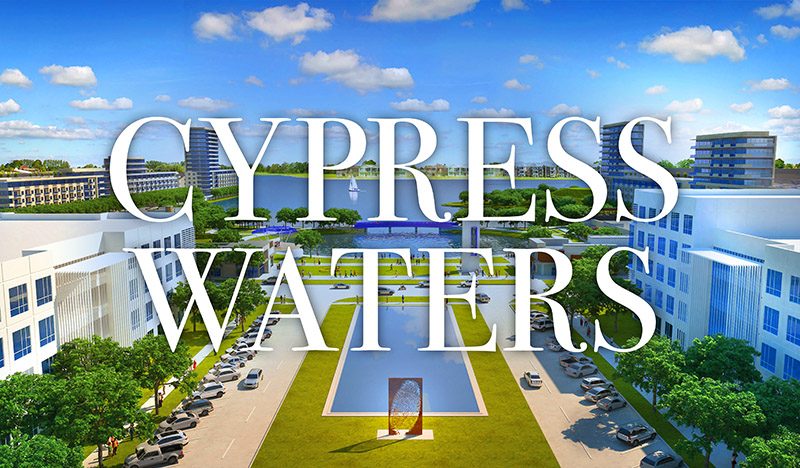 Billingsley Co. has overcome huge hurdles in making Cypress Waters a reality—from dealing with multiple jurisdictions to a lack of infrastructure to lawsuits. Now, after 10 years, all that hard work is finally paying off.

Developer Lucy Billingsley and her husband, Henry, first began eyeing land around North Lake in the 1990s. The large suburban tract had a terrific location—just minutes from Dallas-Fort Worth International Airport, nestled between Irving and Coppell.

“We always said this is a great property if there ever was a moment we might be able to get involved with it,” says Lucy Billingsley. “Finally, that moment came.”

The vision is to create a “really great place to live, starting today and going into the future, and a great place to work,” says Billingsley, who describes the community as sophisticated but casual, high-energy yet relaxed, and immersed in nature. At full buildout, she expects 26,000 people on-site during the day and nearly as many in the evening. It’s a place where people can work, live, and play, and have their children attend excellent schools.

When all is said and done, Cypress Waters, which fronts LBJ Freeway and Belt Line Road, will include 4.5 million square feet of office and retail space, 10,000 multifamily residences, three schools, parks, trails, and a lakeside town center.

With development well underway, most people are unaware of the major roadblocks the Billingsleys had to overcome. For one, the undeveloped property lacked basic infrastructure, such as roads and utilities. And although most of Cypress Waters is officially in the city of Dallas, it’s smack dab in the middle of Coppell Independent School District, with a southern strip situated in Irving.

When word began leaking out about plans for Cypress Waters, the city of Coppell and the Coppell ISD filed lawsuits, concerned about the potential negative impact the project could have on city operations and schools.

There was also the matter of hashing out who was going to pay for what—not an easy thing, with so many parties involved, says Karl Zavitkovsky, director of economic development for the city of Dallas. In 2009 and 2010, respectively, Dallas created two taxing districts for the development, including a municipal management district and a tax increment financing district. Both entities are designed to help pay for infrastructure development, while the MMD allows for bonds to be sold later. Dallas remains responsible for providing police, fire, and emergency services.

Already the Cypress Waters TIF District’s assessed tax value has increased by a whopping 14,171 percent from 2010 to 2013, according to the Dallas Central Appraisal District. The goal is to create additional taxable value of $2.2 billion over the TIF’s 30-year life.

“It’s an outstanding project for Dallas,” Zavitkovsky says. “It’s a longer-term project in the sense that benefits will be reaped over the next 25 to 30 years, but it has very, very good benefits for us.”

AN ISLAND OF LAND

Cypress Waters was one of the last remaining large chunks of undeveloped land in Dallas County, and it sat idle for many years. Dallas annexed the 3,000-acre piece of remote property in the 1950s, and North Lake was created to support a power plant, now owned by Luminant. Throughout the years, the property was used as a public lake and recreation facility, but its zoning remained agricultural until the Billingsleys came along.

“It’s a very unique area,” says Rick Loessberg, director of planning and development for Dallas County. “We’ve got this ability to go in and do it right and have it be good for upscale housing and office and mixed use.”

Short of Joe Pool and White Rock lakes, there aren’t many areas with water features like North Lake, he adds.

Cypress Waters is “a huge development of land that most people didn’t even realize was in Dallas,” says Mary Poss, a member of both Cypress Waters’ TIF and MMD boards. “It is a whole new tax base, and any time you create a new tax base, money is available for all parts of the city,” says Poss, former acting Dallas mayor and City Council member.

There’s no lingering animosity about Cypress Waters, says City Manager Clay Phillips, but questions remain about the development’s outcomes and long-term impact. Although it’s not Coppell’s obligation to provide services such as police and fire to other cities, there are concerns about how the influx of people will affect ancillary services such as libraries, recreation sports leagues, and roads.

“It’s yet to be seen how it will be handled, but having said all that, we’re working well with the Billingsleys,” Phillips says. “We definitely want to be good neighbors to both Dallas and Irving, and at this point we’re managing to ensure we don’t absorb or inherit obligations that we should not on behalf of our taxpayers.”

Phillips adds that in five to 10 years, Coppell and its residents will likely benefit from the additional retail options at Cypress Waters, as well as development that occurs near the project. This fall, a new CISD school, Richard J. Lee Elementary, opened within Cypress Waters.

During the tenuous years with Coppell, Lucy Billingsley remembers then CISD Superintendent Jeff Turner saying one day they’d all be friends.

“I thought, ‘Like hell we are. I’m mad,’” Billingsley says. “But he was right. The reason we all got over it is because everyone had something they cared deeply about. We resolved the conflict, and we all still have things we care deeply about—just now they’re in concert.”