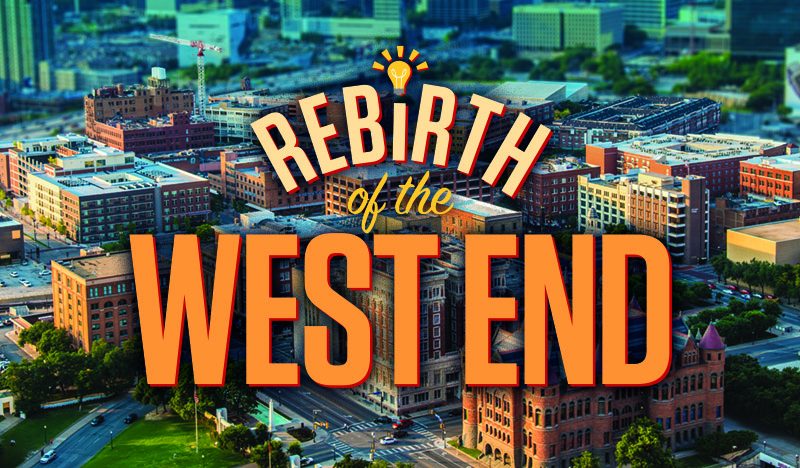 Developers, stakeholders are creating an innovation district that rivals the area’s former glories as a historic, entertainment district

The West End has one of the largest concentrations of historic buildings in Dallas with a narrative that dates back to the Caddo Indians in the 1800s.

Located in the northwest corridor of downtown Dallas, the 67.5-acre historical district has experienced its share of prosperity, depression, and rebirth. As the story goes, the city’s founder, John Neely Bryan, first established a trading post and helped attract the Houston & Texas Central Railroad, spurring construction of multistory manufacturing warehouses in the early 1900s.

For decades, the West End served as manufacturing hub for hats, crackers, candy, apparel, farm equipment and saddles. The developing suburbs eventually lured companies away from the city core and even heightened interest after the assassination of President John F. Kennedy in Dealey Plaza couldn’t sustain the West End through a difficult economy.

In the 1980s, a new revival took shape, with a focus on tourism and entertainment. Many buildings were repurposed, housing the iconic Starck Club, touristy retail shops, a 10-screen cinema, Planet Hollywood, and night clubs in the Dallas Alley.

But 9/11 came and the district fell on hard times with many of the buildings succumbing to foreclosure and bankruptcy, sitting vacant for a decade or more. A smattering of institutional restaurants such as Spaghetti Warehouse and The Palm have held court since 1972 and 1983, respectively, and some apartments and office space kept the area on life support.

But now a cavalry of well-established developers and downtown stakeholders are driving the creation of an innovation district that could be at the forefront of new ecosystems also being created in Atlanta, Baltimore, Buffalo, Cleveland, Philadelphia, and San Diego. Innovation districts are emerging near anchor institutions in the downtowns and midtowns of these cities and “have the unique potential to spur productive, inclusive, and sustainable economic development,” according to a Brookings Institute report.

It may be the West End’s most spectacular revival yet.

It’s no secret that Dallas is running short on historic building stock. The city has experienced a flurry of redevelopment over the last few years. These eclectic brick and timber spaces are commanding premium rates from Main Street to the Design District, and the demand for “creative class space” has never been higher.

Many credit the heavy influence of the Dallas Entrepreneur Center and its coworking space at 311 N. Market St. for drawing attention to the West End’s historical assets and proximity to the urban core. Since opening two and a half years ago, The DEC has attracted 45,000 entrepreneurs through its doors and introduced startups to a hip part of town just itching for redevelopment.

“We felt like putting The DEC in the West End could help revitalize the area,” says Trey Bowles, The DEC’s chief executive and co-founder. “It’s been proven in multiple cities that putting an active entrepreneurial center in the middle of an area that needed to be rehabbed would do that. People are eating down here and drinking down here and spending time. It’s really becoming a destination downtown and the real estate community is responding.”

Uber opened a West End office around the same time as The DEC. Bowles says the ride share tech company has become a valuable partner, hosting pitch sessions and being a “great fellow citizen and innovative company that cares about the city.”

Being near other entrepreneurs was a big draw for Ben Lamm who handpicked the West End for the headquarters of his new venture, Conversable, whose platform utilizes bots to help companies deliver on-demand content, information, and ordering to customers through Facebook Messenger, Twitter, and other platforms. He said that the Dallas office of Conversable will serve as headquarters and focus on system integration and operations, while core engineering and product will be in Austin.

“It was important for us to find a place to move our business that was in the heart of the startup activity in Dallas,” says Lamm, founder and former chief executive of Chaotic Moon, which has a Dallas office, and was sold to Accenture in 2015. “It was always my goal to support the local entrepreneurial community and to be the model for what I hope all startup companies could become. With the work that The Dallas Entrepreneur Center was already doing in the West End coupled with the new focus on innovation through the work of the Dallas Innovation Alliance, the West End was the right place for us to expand from Austin.”

Nathan Huber of Zipcar, which has officed at The DEC for two years, says the West End location is close to the DART light rail and its walkable restaurants and bars are ideal for entertaining clients.

Over 32 tech/media/innovation companies occupy 215,000 square feet of the available 1.6 million square feet of office inventory in the West End, according to CBRE.

Many believe what’s different about the West End’s rebirth this time around is ownership. Instead of one-off buyers, well-heeled institutional owners are acquiring properties that they say they’re willing to own and operate for the long haul.

“We’re full and stabilized,” John Zogg, managing director for Crescent. “We see this as a long-term ownership strategy.”

The cluster of tenants working in design, creative, and tech fields there prefer nontraditional office space that’s cool with interesting surroundings. Among them is The Grove, a coworking community that opened three years ago at 501 Elm St.

“The growing employment base is the millennial population and we’re finding that millennials have it right,” Zogg says. “It’s just phenomenal office product.”

Crescent is investing more than $1 million in infrastructure and updates to make the buildings look more modern and slick, but in a historical context. The developer is working closely with other owners Spear Street Capital and Granite Properties to ensure the buildings maintain a cohesive look. The area’s vibrancy also relies on a solid plan to address landscaping, green space, transportation, and parking issues, Zogg says.
Dallas advertising startup 3Headed Monster chose Crescent’s 208 N. Market St. (also known as the Awalt building) to locate its 10-person shop.
“We’re a new model ad agency focused on Tomorrow Brands so the transformation that’s happening in this neighborhood was a good fit,” Creative Chairman Shon Rathbone says. “The buildings have some funky history, but the businesses are tech-savvy and creative. The perfect place for our Monster Lair.”

At the nucleus of it all is Granite Properties’ Factory Six03, formerly the West End Marketplace. The 237,000-square-foot project at Market Street and Munger Avenue consists of two structures and an eighth-floor addition called “The Stack” that will include a tenant lounge and conference space with rooftop patios. Renovations on the space, which has been vacant for nearly a decade, are expected to be complete in early 2017 and will include 10,000 feet for restaurants. Expect to see a hand-picked roster of innovative companies, both large and small.

“In other markets, you’d see Amazon, Facebook, and Google taking this type of space,” says Greg Fuller, Granite’s president and COO. “We have lots of proposals out. We’re being picky right now.”

These owners would be well served by banding together to market the district, and be aggressive and selective in the pursuit of retail, restaurants, parks, and outdoor space to preserve the innovation vibe, says Jeffrey Eiting, vice president, technology and media practice at CBRE.

“A burgeoning tech scene in Dallas and nationally, the right type of real estate well positioned in the urban core, all of this is a formula for success,” he says. “Plus, if anyone can do it, the roster of capable and proven new owners can. I wouldn’t bet against them.”

Universal Mind, a digital software technology agency based in Denver, opened its Dallas office in the West End in April. Andrew Sevin, vice president of client services, says he started scouting space and connected quickly with local resources to find the perfect location.

“The West End has that incredible neighborhood vibe,” he says. “I started working with The DEC and heard about the DIA’s (Dallas Innovation Allicance) smart city plan. Close proximity to downtown presented an amazing opportunity to office there.”

The West End has had its share of reinvention, but its rebirth as an innovation district has all the right people excited about its potential.
“Everybody loves an underdog,” Eiting says. “The West End is a great sort of comeback story. It’s an area that has lost its identity over the years and is now a thriving district.”

WHAT IS A SMART CITY?
An emerging community of civic leaders, data scientists, technologists, and companies are joining forces to build “Smart Cities” – communities that are building an infrastructure to continuously improve the collection, aggregation, and use of data to improve the life of their residents – by harnessing the growing data revolution, low-cost sensors, and research collaborations, and doing so securely to protect safety and privacy.

Bowles says that’s been The DEC’s objective from day one, but it needed to help build and aggregate a critical mass of creative talent to attract more people to the area and create a baseline for the innovation district.
The microcosm of bars, restaurants, multifamily, and businesses makes it ripe for rejuvenation. Last fall, The DEC helped launch the Dallas Innovation Alliance, a public-private partnership that’s dedicated to the design and execution of a smart city strategy for Dallas, with initial efforts focused on the West End.

Jennifer Sanders, executive director and co-founder of the DIA, says plans are underway for five to seven projects in the West End that will focus on smart infrastructure, smart mobility, and connected living. The projects range from public Wi-Fi, and intelligent street lights that incorporate sensors to measure air quality and traffic to a bike sharing program. Another will enhance transportation by alerting commuters in near real-time when the next bus or train will arrive.

Plans for the district include bringing in top corporations to build innovation spaces/labs downtown to showcase smart technologies, like the Internet of Things, that can interact with external audiences and attract millennial talent.

“We want to create these presences for large corporations and startups that point to innovation going on all over DFW,” Sanders says. “The West End (will be) a living lab for all these smart technologies, It’s a place we can point to for a tourism perspective and as a major draw for external audiences. True innovation is the aggregate of corporations, startups, citizens and impact organizations creating a true live/work/play experience.”

Dallas was selected as one of 10 cities for the inaugural Envision America, a smart cities initiative that was announced at the White House in the fall of 2015. The cities will leverage technology collaborators and businesses to address the challenges of climate change and improve city services.

In late June, the Dallas Innovation Alliance unveiled its vision for the living lab in the West End, presented in the form of concept renderings and a 3-D from BOKA Powell and a virtual reality experience from Dallas-based agency 900lbs of Creative that show what the West End looks like today and what it will look like once smart elements are incorporated into the area in the months ahead.

Adds CBRE’s Eiting: “There are lot of stakeholders working there feverishly to get smart cities up and running. The West End is a compact, defined geographic area and it will be a great spot for this initiative.”