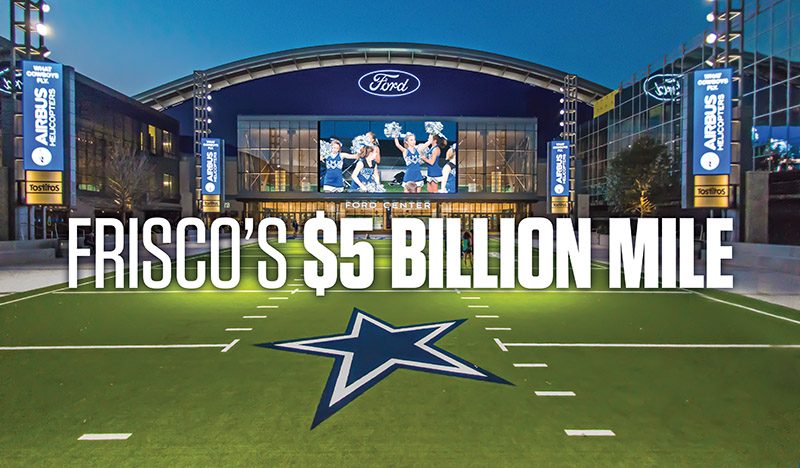 With the Dallas Cowboys on board, “just about anything can happen” along the city’s $5 Billion Mile.

For more than a decade, Frisco planners have strategically put together an impressive collection of public-private sports partnerships. The city-owned destination venues—Dr Pepper Arena (Dallas Stars), Dr Pepper Ballpark (Rough Riders), and Toyota Stadium (FC Dallas) – have proven to be an economic boon. But they would also serve as the testing ground for what would become the city’s biggest win yet.

In August, the Dallas Cowboys debuted its new headquarters and training facility at The Star, anchoring a 91-acre development that also includes a hotel and office and retail space. It’s ground zero for Frisco’s so-called “$5 Billion Mile,” a stretch of the Dallas North Tollway between Warren Parkway and Lebanon Road that’s home to The Star and three other huge mixed-use projects. (Despite its name, the projected capital value of investments stands $6.2 billion—and growing.) They are: Frisco Station, a $1.7 billion project adjacent to The Star, developed by Hillwood, VanTrust Real Estate, and the Rudman Partnership; Wade Park, a $2 billion development from Thomas Land & Development; and The Gate, a $1 billion project from Invest Group Overseas.

Three years ago, few people imagined that the Dallas Cowboys would choose Frisco for its headquarters—a move that has created a domino effect of high-end, destination-style projects. “I think as time goes on we’re going to see a lot of things we didn’t think would happen in Frisco,” says Jim Gandy, president of the Frisco Economic Development Corp. “When you have a world-renowned company like the Dallas Cowboys, just about anything can happen.”
At full buildout, within the next two decades or so, the $5 Billion Mile is anticipated to total more than 15 million square feet of commercial space and employ about 44,800 people.

Frisco, which is situated within both Collin and Denton counties, is no stranger to construction cranes—or moving vans. U.S. Census Bureau figures show the city continues to be one of the fastest-growing in the country; it was ranked No. 1 nationally for growth from 2000-2009. Its population has risen more than 300 percent since 2000, going from 33,714 to 157,040 residents. When it matures, the city will be home to an estimated 375,000 people.

“It’s fair to say that the majority of people who are going to live in Frisco aren’t even here yet,” Gandy says.

It was never Frisco’s intent to be a suburban bedroom community. City leaders long have pushed the notion that unique destination venues, coupled with the Frisco Independent School District’s small-school model—which caps high school population at 2,100 students, allowing for more extracurricular participation—would differentiate it from other cities. Much of Frisco’s feverish growth can be attributed to the FISD, which adds about 3,500 new students a year, making it the fastest-growing school district in the state and one of the top in the nation.

For the 2016-17 school year, the district has more than 55,000 students enrolled; that number is expected to climb past 69,110 students by 2020. For some perspective, consider that in 1996 FISD had five schools, including one high school. Today there are 68 schools in the district, including nine high schools, with more in the works.

Developers and residents agree that Frisco operates like a well-oiled machine. City officials and economic development teams work in tandem with the school district to support initiatives that are in line with its mission and long-term goals. “Partnerships are really central to Frisco’s growth,” Frisco Mayor Pro Tem Tim Nelson says. “The strength of a partnership is defined solely by the quality of the partners, principal among them is the Frisco ISD. We know in Frisco that what is good for the school district is good for the city of Frisco, and we know that a big part of the economic engine of Frisco is driven by the partnership we have with Frisco ISD.”

Dallas Cowboys owner Jerry Jones agrees. The Star’s Ford Center is said to be the only NFL training facility in the country that’s shared with a public high school athletic program. The 12,000-seat multi-use arena is owned by the city of Frisco, but managed by the Cowboys. “From the get-go, the most important thing that Frisco ISD and [Superintendent] Dr. Lyon brought through the door was that relationship with amateur athletics and that relationship with Frisco,” Jones says.

Clarity of vision and leadership longevity have benefited the city. Gandy joined in 1996, George Purefoy is Frisco’s first and only city manager, and Maher Maso began serving on the City Council in 2000 before becoming mayor in 2008.
“They are very open to business and development and want to do it in the right way and in a high-quality way,” says Mike Berry, president of Hillwood Properties, master developer of Frisco Station. “It makes for a pretty strong package if you’re a company looking to locate in the area. They welcome people with open arms.”

Location also is a key driver in Frisco’s growth, as regional development pushes its way north. The Dallas North Tollway’s office corridor and Preston Road’s retail corridor both run through the city, bordered by State Highway 121 and U.S. Highway 380, which also are seeing rapid growth. About 62 percent of Frisco’s 70.2 square miles has been developed so far.

The Rudman family has owned multiple parcels of land there for more than five decades, including 333 acres within the $5 Billion Mile. A few years ago, the Rudmans sold 91 acres to a developer who later fell on hard times. The property reverted back to the lender, GE Capital. A broker called Gandy to let him know the land was up for grabs. “I recall the 91 acres was on the market for $20 million,” he says.

The Frisco Community Development Corp. bought the land. After talks with Nebraska Furniture Mart didn’t pan out – the Berkshire Hathaway company chose The Colony instead of Frisco – a new prospect emerged.
“It wasn’t long after that happened that the opportunity to locate the Dallas Cowboys on that 91 acres surfaced,” Gandy says. It took 90 days to close the deal — a remarkable feat considering the players involved an NFL team, the city, FISD, FCDC, and the FEDC.

The city now owns 20 acres at The Star, including the Ford Center and two outdoor practice fields, while the Jones family owns the rest. The Rudman Partnership owns the remaining 242 acres that wraps around The Star, and is working with developers to build Frisco Station.

The different types of housing options, walkable amenities, and other offerings within the $5 Billion Mile are expected to attract educated workers and millennials—a plus for corporations and others targeting those highly desired employees. “All of these are real high-end developments because the influence and property values along the Dallas North Tollway make it a premier location,” Gandy says. “It’s been absolutely incredible. It appears the opportunities could be unlimited.”